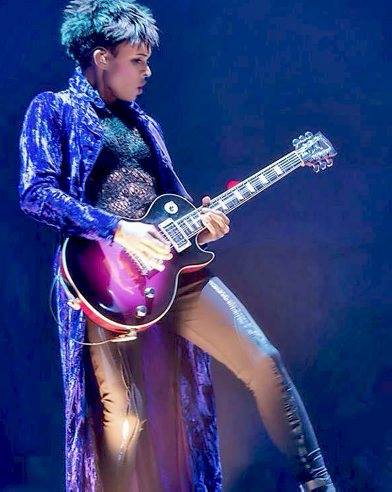 Is a multi-instrumentalist born and raised in Milwaukee, Wisconsin. After attending Milwaukee High School of the Arts, Angie went on to study at the world renowned Berklee College of Music in Boston. When she arrived at Berklee, the music industry was in full disruption - she auditioned for school on cassette, recorded in school on mini-disc and by the time she left everything was digital. The learning curve was steep, requiring Angie to be fast and flexible. While attending college, Angie toured the U.K. with a Brooklyn based band, The Femme Nameless, opening for Femi Kuti at the Barbican Centre in London. After leaving Berklee, Angie fast-tracked it to Los Angeles, where she has played guitar for artists such as Will.i.am, Nicole Scherzinger, Boney James, Stevie Wonder, Alana Grace, and WAX.

Angie auditioned for and was invited to join the Cirque du Soleil production of Amaluna, touring throughout the United States and Canada for three years. In 2017, Angie toured Asia with pop sensation girl-group Fifth Harmony and Argentina/Brazil with five-time Grammy Award-winning CeeLo Green. Angie has held the position as lead guitarist for David Byrne's "American Utopia" She participated in the 2018 tour and 2019-current Broadway run. The show was also filmed by world renowned director Spike Lee.