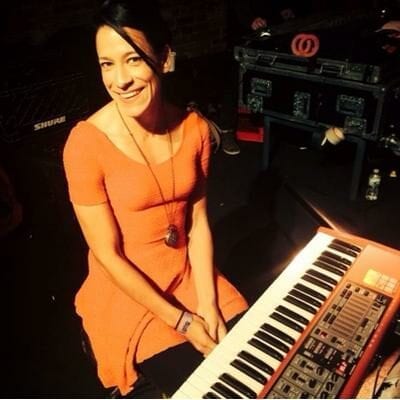 Angela Ortiz is a pianist, composer/lyricist, singer/songwriter and educator based in Brooklyn, NY.

Her songwriting and composition work have been featured on NPR and reviewed in All About Jazz, Cadence Magazine and TimeOutNY. She was awarded the Silver medal in the 2007 mid-Atlantic Songwriting competition and has had the distinction of being a finalist in the 2009 Williamsburg Songwriter’s Competition.

She released her first album “All About You” on Random Chance Records in 2009 (which was made available worldwide through City Hall Records), and her second album “Dismantle This Bomb” in 2011. Her writing heavily features original horn and woodwind arrangements, intertwined with electronic and acoustic percussion and piano. Her music arrangements and works have enjoyed airplay on radio stations in the US, Poland, Germany, the UK, France, Italy, Australia and New Zealand. She has also composed numerous works for musical theater and is currently working on a musical that incorporates contemporary sounds with Bomba, Plena and Salsa - the sounds of her father’s native Puerto Rico.

In addition to her composition and performing credits, she has also been in several operas including the NY Premier of L’Enfant et les Sortileges (directed by Metropolitan Opera director Robin Guarino, with english libretto by Sheldon Harnick) and The Old Maid and the Thief (Frederick Lowe Theater).

Currently, she is involved in many projects with artists in and around NYC, including the Williamsburg Salsa Orchestra. Angela also helms a vocal and piano studio in Brooklyn where she prepares and coaches young students in NYC for specialized high school and theater auditions.

She holds a Bachelor’s of Music degree from NYU’s Steinhardt School and has also studied latin/jazz piano with Pablo Mayor at The Harbor Conservatory in Harlem.

Angela was also a competitive distance runner and qualified to run in the United States Olympic Trials marathon in 2020.