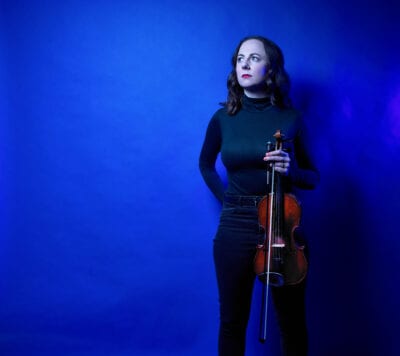 Andie Tanning is a violinist and performer.

She is the cofounder and musical director of Wild Shore New Music, now in its eighth year as Alaska’s premier new music festival. She released her debut album, “Dandelion,” in December 2018. Steve Dollar of the National Sawdust Log writes, “The stylistically diverse Dandelion is not only a scrapbook of Springer’s experiences and influences, but also an open and always surprising collaboration with composers and video artists whose spirits are illuminated through the violinist’s intrepid musicianship and exploratory nature.”

She has toured internationally as a company member of the New York City Players, has served as a multi-instrumentalist in theater groups Object Collection and New Paradise Laboratories, was the fiddle player in the musical, The Snow Child, by John Strand, Georgia Stitt and Bob Banghart, and was a violin sub in the Broadway revival of Oklahoma!. Ongoing musical collaborations include a duo with guitarist James Moore, the minimalist rock band Thee Reps, and the development of a new opera by Aaron Siegel. Her album with James Moore, “Gertrudes,” was released on New World Records in 2016. She has performed at LA Opera, The Kitchen, The Pompidou, and Carnegie Hall.

Her work has been reviewed by the New York Times, New Sounds Live, and The Wall Street Journal.