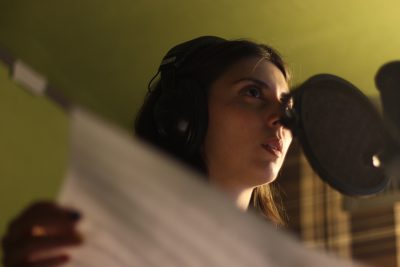 Vocalist, multi-instrumentalist, and composer Amanda Ekery conjures a rich creative world: one in which creative improvised and popular music traditions weave together seamlessly, while intersecting with research and unusual collaborations. Her exceptional musical versatility has made Ekery a sought-after performer, presenter, and composer for a wide range of artistic endeavors. Downbeat, reporting on Ekery’s imaginative personal style states “within her impressive compositions, [Ekery] displays her natural inclination for inventive compositional moves and popular genres.”

Ekery composes music filled with imagery and strong narratives. Her compositions have earned support from New Music USA, Chamber Music America, and the Jerome Foundation, and have been featured at the Portland Jazz Festival, Panama Jazz Festival, and the Kennedy Center. Ekery’s 2018 album “Keys With No Purpose,” was written as a reaction to the sexist culture women continue to face in jazz and informed by her research on females in jazz education. The album received praise in Downbeat Magazine, features an 11-piece large ensemble, and earned her the St. Botolph Club Foundation Emerging Artist Award. Árabe is Amanda’s ongoing genealogy composition/research project that focuses on Syrian immigration to El Paso/Mexico, her family’s history, and the influence these mixed cultures had on film, food, economy, and music. She works with the Syrian Ladies Club of El Paso, Dr. Mark Eggerman a Yale S.W.A.N.A. scholar, food anthropologists, and her family to write lyrics, gather artifacts, and work towards creating an interactive exhibit for the El Paso community.

“Some Short Songs,” Ekery’s debut release, is a collection of original music exploring George Russell’s Lydian Chromatic Concept of Tonal Organization. “Some (more) Short Songs” is the sequel to Ekery’s debut releasing December 3, 2021 and was funded by the inaugural Performance Plus Award from Chamber Music America in 2019. The album is produced by Sylvie Courvoisier and alongside Ekery features Andrew Boudreau on piano, David Leon on alto sax, Wendy Eisenberg on guitar, and Jeong Lim Yang on bass. Ekery worked with Boudreau and Yang on developing “Some (more) Short Songs” for two years before inviting Leon and Eisenberg to join the drummerless quintet. Together with Courvoisier, they constructed a sound that interplays flawlessly between tracks.

Ekery is a dedicated teaching artist, committed to education equity and teaching composition as a tool for self-expression, confidence, and collaboration. She is the founder of El Paso Jazz Girls, a non-profit organization for young female musicians to learn about jazz from professional female musicians and combat gender demographics in her hometown’s jazz community. The organization receives support from the Jazz Education Network and Herb Alpert Foundation, and partners with local auto salvages, bakeries, and female-owned restaurants to ensure the program is cost-free for students.

Research heavily informs and inspires Ekery’s compositional process and education projects. Her recent research “Exclusion and Pushout: Females in Jazz Education” is published in the 2021 Routledge Companion to Women in Music Leadership and earned her invitations to present at the International Women in Music Leadership Conference in London, the Washington Women in Jazz Festival, and at The New School in New York City. Additionally, in 2017 at the International Jazz Voice Conference in Helsinki, Finland, Ekery presented her research and self-published workbook, “Arranging for the Solo Jazz Vocalist: A Workbook That Isn’t Boring,” which includes arranging techniques, transcriptions, lessons, and tips written specifically with vocalists in mind. Ekery’s other research includes papers Syrian Female Musicians: the Last One Hundred Years, and Female Bandleaders: Stories of Perseverance, Discrimination and Grit, which she developed into a course and taught at Tufts University in 2018.

An innate collaborator, Ekery has worked with an array of transcendent artists including pianist and MacArthur Fellow Ran Blake, saxophonist and composer Darius Jones, pianist Sylvie Courvoisier, vocalist Fay Victor, and electronic tape artist BlankFor.ms. She regularly works with creatives in other fields outside of music as well. As the creator of Crayon Box, an interactive workshop series, Ekery collaborated with James Coyne, a computer software designer, to build an app for third grade students to learn about improvisation and composition via technology and visual art. For Árabe, Ekery is collaborating with food anthropologist Dr. Gina Nuñez-Mchiri to map out Arabic restaurant history in El Paso and unearth what old menus can say about immigration and assimilation.