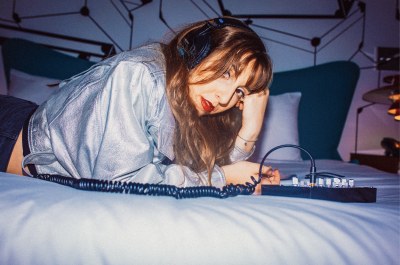 Alexis is a singer, songwriter, producer and composer who has worked with chart-breaking artists including TWICE, Becky G, Trevor Daniel, Bebe Rexha, Tainy, Anthony Ramos, Abigail Barlow and more, has created her own independent artist project that is receiving viral attention, has co-created an original musical and has had her songs and film scores utilized in award-winning shorts and feature-length films.
Quickly having to leave Los Angeles and relocate back home after the pandemic started, Alexis seamlessly readjusted to zoom sessions; just months after graduating from the Frost School of Music, and only weeks into the quarantine, Alexis was able secure her first major label release. With producer Daramola (Kesha) and writer Rozzo (Selena Gomez), she cleverly flipped one of the most emblematic songs from the Spongebob franchise, the “F.U.N.” song. “F is For Friends” by Becky G, Trevor Daniel and Tainy, penned by Alexis, is the third single on the “Spongebob Movie: Sponge on the Run” soundtrack.

A few months later, Alexis became a chart-topping producer. Tik Tok sensation Abigail Barlow’s debut EP “Abigail”, featuring Alexis’ delicate yet powerful production of “If I Saw You Today”, reached the number 2 spot on the iTunes Pop Charts and the number 29 spot on the All Genres iTunes Album Charts just 12 hours after its release. With the ability to break through genre walls, Alexis has a knack for helping new artists craft and develop their unique sound. Her list of placements includes “Shadow,” a break-out single by internet star Jimmy Levy, which was released through Empire Records and has collected over 10 million streams on Spotify.

Along with writing and producing for other artists, Alexis recently developed her own artist project under the name “Idarose.” Her debut single “Talk About Myself” was featured on the Starbucks Coffeehouse Pop Playlist and played in Starbucks stores nationwide. At the beginning of 2021, after receiving over 1.8 million views on Tik Tok on a small clip of original song, she released her breakout single “When I Don’t Have You,” which she co-wrote with Abigail Barlow and self produced. The song has garnered over 700,000 streams on Spotify alone. She just released her follow-up single “Different People” which she wrote, recorded, produced and mixed herself.

Alexis completed her undergraduate degree in Media Writing and Production and minored in Songwriting and Motion Pictures at the University of Miami Frost School of Music. She is now NYC bound where she will be receiving her Master of Arts in Creative Media and Technology from Berklee College of Music with a specialization in Writing and Design for Musical Theater. Alexis recently signed as a songwriter with Warner Chappell and EP Entertainment.