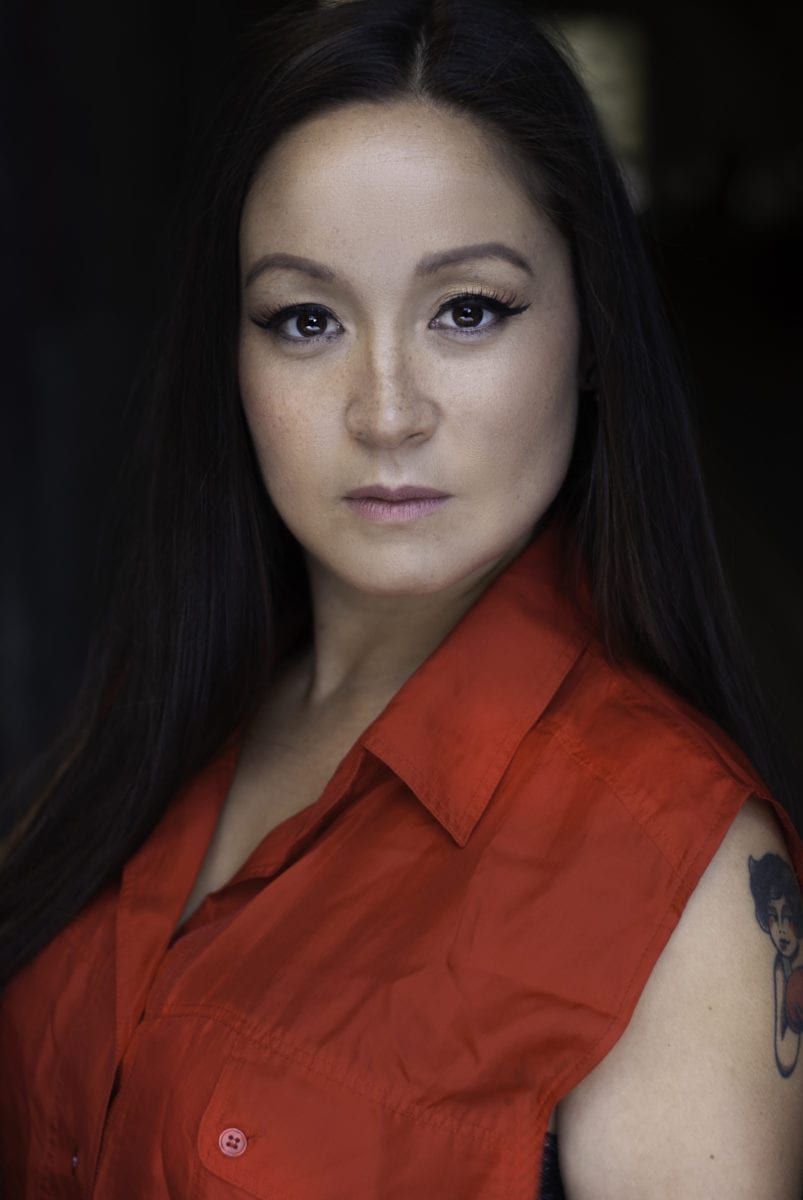 ★★★★ “With Australian accents and a deliciously gritty, full-throated, DIY-tinged musical soundscape by musical director Victoria Falconer that dirties up and doubles down on the original’s pop-punk roots, the musical is ripped free from its American mythology.” - Audrey Journal on LIZZIE, Hayes Theatre/Sydney Festival 2022

★★★★★ “Enormously enjoyable, lightly cabaretic… Falconer re-orchestrates the score so it is played by a small bluegrass ensemble, supplemented by brass instruments and electronic flourishes... almost certainly the first use of amplified electronic dance music in a production of Oklahoma! If one is going to continue to stage classics like Oklahoma! then Richard Carroll and Victoria Falconer offer an exemplary way of doing this – a highly recommended production.” Limelight Magazine on OKLAHOMA!, Black Swan State Theatre Company 2020

Victoria was most recently the recipient of the 2022 Frank Ford Commission from the Adelaide Cabaret Festival, through which she developed and debuted AND THEN YOU GO: THE VALI MYERS PROJECT. A multi-genre piece set to original music, it fuses elements of theatre, cabaret, circus and dance to tell the story of Vali Myers, one of Australia's true cult arts figures.

★★★★ "And Then You Go features original music and songs with styles swirling through jazz, rock and psychedelia. Some of the quieter compositions and those with singing in unison are particularly effective at invoking the depths of the artist’s struggles... And Then You Go is an unpredictable, uncategorisable, sometimes raw and often hauntingly beautiful celebration of a life lived without compromise. If you’re ready for a trip to parts unknown, this is the show for you." InDaily, 2022

Other projects in 2022 include: musical direction and performing in a third season of the Australian re-staging of Once (Darlinghurst Theatre Company, dir. Richard Carroll) for which she was nominated for a Sydney Theatre Award in 2019; musical supervision and arranging on LEAP, a new cross-genre dance piece (dir. Amy Campbell), musical direction of LIZZIE THE MUSICAL (Hayes Theatre/Sydney Festival, dir. Maeve Marsden), reprising her role in the Ruby Award-winning The Boy Who Talked To Dogs, (Slingsby Theatre /State Theatre of South Australia), and musical direction/performing in a rework of GODSPELL (Hayes Theatre, dir. Richard Carroll).

Other previous music direction credits include the debut of Bourgeois & Maurice's Insane Animals (dir. Philip McMahon for HOME Manchester, 2020), the queer reimagining of Oklahoma! (dir. Richard Carroll for Black Swan State Theatre, 2020), Courtney Act’s Under The Covers (Underbelly, London), the Unroyal Variety (Hackney Empire 2019) and the debut of Sasquatch The Opera (Summerhall, Edinburgh 2018) written and composed by Roddy Bottom of Faith No More.

★★★★★ "Led by an immensely talented musical director, Victoria Falconer, all 11 cast members play an instrument (and some play multiple) and their skills result in a rich wall of sound filling the Eternity Playhouse, doing absolute justice to the show’s wonderfully-crafted songs." Broadway World on ONCE, 2019.

Earlier this year, Victoria co-created a new festival offering - Smashed: The Brunch Party - a femme-fronted, diverse drag and cabaret show that received 5 star reviews for its debut run at Adelaide Fringe, with Victoria as host. She is also currently engaged as associate composer/arranger and band leader with the Australian-based WOC political performance ensemble Hot Brown Honey.

★★★★★ “The host with the most… From the get go, Falconer engaged and entertained her audience, never missing a beat to get in and amongst the people creating a connection that so many other shows fail to do. Camp, comedic genius.” Theatre Travels (Smashed, 2021)

“Falconer stands out as the star all-rounder, with musical versatility, alluring jazz vocals and the impish shtick of a born comedienne.” – The Age (Fringe Wives Club, 2019)

★★★★★ "Victoria’s musical prowess was a highlight of the show as she transitioned seamlessly between instruments and appeared to masterfully improvise along with the banter of the audience.” Theatre People (Fringe Wives Club, 2018)

Victoria is a founding executive member for The People of Cabaret, an artistic initiative formed in 2020 to amplify and advocate for artists in cabaret, circus, burlesque and associated disciplines who identify as Indigenous and/or Bla(c)k and/or people of colour.

Alongside their advocacy work, TPOC have curated two week residency of shows for Bloom Festival Sydney, created an online variety extravaganza for Melbourne Fringe (which won the Spirit of the Fringe Award and a Green Room Award for Best Ensemble), and presented the variety show We Are Here at Sydney Festival 2021. Victoria leads the Mentorship Programme empowering and upskilling emerging IBPOC artists across the country. And for the last three years she has also been a mentor for Midsumma's Pathways program, a nine-month mentorship and workshop program for LGBTQIA+ artists with disability.

Victoria has curated for a number of festivals and variety shows, including series of comedy and cabaret for the Bush Theatre London (Unwrapped, 2018), and rocknroll cabaret show Midnight Marauders (2018).

Victoria’s most recent work as composer is on festival-selected documentary YER OLD FAITHER (dir. Heather Croall, 2020), animated short DOUBLE PORTRAIT (dir. Ian Bruce, 2019) which received prizes for Best Animation at Aesthetics Short Film Festival and Best in Category at the London International Animation Festival, as well as being long-listed for a BAFTA. She was sound designer for Trygve Wakenshaw's ONLY BONES 1.4 (Soho Theatre/London Mime Festival 2020).

Victoria's appearances in London include the Royal Albert Hall, the National Theatre’s River Stage and the Barbican, and she has played for recording sessions in famed London studios including The Church, Sofa Sound and Abbey Road Studios. Festival performances include Glastonbury, Latitude and Bestival (UK), Buskers Festival (NZ) and Clockenflap (Hong Kong). She performed on theremin, violin, accordion and musical saw accompanying John Cameron Mitchell, Ali McGregor and Joey Arias at Adelaide Cabaret Festival 2019, played on the debut album of chamber-pop artist The Anchoress, duetted live with Neil Gaiman and Amanda Palmer at Koko London, and is a member of Adelaide’s premier art-rock band Satan’s Cheerleaders.

In a previous incarnation (where she was known as Victor Victoria), she composed, scripted and performed as one half of EastEnd Cabaret, the salacious cult musical comedy duo. Playing cabaret and festival stages around the world, the pair sold out shows for 7 years at Edinburgh, Adelaide, Brighton and Perth Fringe Festivals, winning Best Cabaret (Adelaide Fringe 2012), Best Musical Act (London Cabaret Awards 2015) and described as “irresistible... shades of Victoria Wood and Julie Walters via Liza Minnelli” by The Guardian (2014).

TV appearances include The Courtney Act Show on Channel 4 (UK), BBC Three’s Live at the Electric (UK), ABC's Comedy Up Late and Q&A (Australia) and NBC’s Before The Morning After (US). Victoria has been named one of Time Out London's Top 10 cabaret performers, and was on the Hospital Club's h100 list as one of the top 100 influential and innovative artists working in the UK creative industries.

★★★★ “Victoria Falconer is an exceptionally talented woman… her musical skills are mesmerising… her creativity is impeccable.” The Advertiser on OXYMORON, 2018

★★★★ “An acclaimed multi-instrumentalist with excellent comic chops and an innate ability to steal a show.” - Broadway Baby on OXYMORON, 2018.

★★★★ 1/2 "The songs performed are all new and exciting originals, [played on] a splendid blend of masterfully played instruments... And Then You Go – The Vali Myers Project is not only a lovely way to remember and honour the late Vali Myers, but is also inspiring to its audience, ensuring everyone leaves the theatre with a little bit of Myers’ bohemian magic, which hopefully blooms within their everyday lives." Glam Adelaide on AND THEN YOU GO, 2022