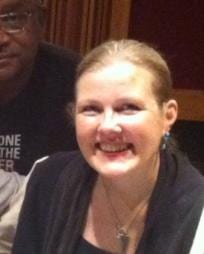 Sue’s career has been full and varied, ranging from Broadway productions to films to recordings. As a conductor and musical director, Ms. Anderson has worked with the Broadway and national touring companies of PIRATES OF PENZANCE, ME AND MY GIRL, and CATS. She played in the orchestra pits of CHITTY CHITTY BANG BANG and WOMAN IN WHITE and is currently playing in SPAMALOT. She has conducted Pops concerts with the Milwaukee, Detroit, Phoenix, Portland and Shreveport orchestras and most recently conducted the London Philharmonia at Abbey Road Studios.
An accomplished pianist, Ms. Anderson was the featured on-stage pianist in Broadway's JERRY’S GIRLS. She also performs regularly at Carnegie Hall with the all-state choirs produced by Field Studies International.
Sue was the musical director for The First All Children's Theater, The Broadway Local (an improvisational comedy group), SoundBites (a political satire group for National Public Radio), the premiere of MARTIN GUERRE (directed by Mark Lamos, at Hartford Stage) and has toured many times with the Pittsburgh Civic Light Opera. She has been the associate at the Westchester Broadway Theatre for MISS SAIGON, MEET ME IN ST. LOUIS, and BYE, BYE BIRDIE. She worked on the films "Clever Jack," "Svengali," and "The Ultimate Solution of Grace Quigley" in various capacities.
Some of the fun and unusual things Ms. Anderson has done were coaching Rex Harrison in the revival of MY FAIR LADY, teaching Peter O'Toole to play the piano, enjoying the finest chocolates with Katherine Hepburn, and being repeatedly kissed by Kevin Kline. Sue is the proud mother of two children, Lucas and Emily.