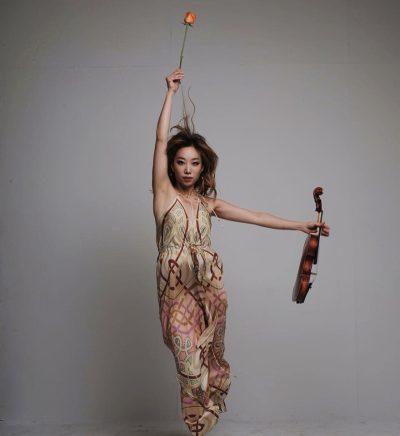 Sita Chay is a violinist, composer, and producer who won a 2017 Latin Grammy
Award for Best Mariachi Album, as violinist with the Flor de Toloache. She is also a recipient of New York Foundation for the Arts Women's Fund, New Music USA’s Creator Development Fund, and Lower Manhattan Cultural Council’s Creative Engagement Grant for various projects she is envisioning.

Her innovative solo style continues to be recognized by respectful musicians such as
Frank London, John Zorn, and many others and she is invited to give her solo
composition concert series at the Stone 2023.

Ms. Chay is the director and a founder of the Korean Shaman Music Ritual, SaaWee, which was received by international critics as a “delicate powerhouse”. For SaaWee, she has interwoven her theatrical experiences from Broadway shows, folkloric spirituality from Korean shaman rituals, and contemporary music flare from New York jazz scenes. SaaWee's Return of Songbirds debuted at the Lincoln Center as part of #Retartstage project in 2021 and was invited to Ars Electronica Festival 2021.  SaaWee won the California Music Video Awards 2022 in Best World Music category.

She has been passionate for highlighting lives of the immigrants in several ways. She had written music for a musical in Korea "Love in Asia". It told a story of newly faced challenges in Korea from racial and cultural diversity. She also started a world music project highlighting the similarities between various immigrants communities in hopes to bring awareness in our capability to empathize with culturally different people. The project was called Cosmopolis Collective and was invited to many panel discussions combined with music performances. This project manifested her belief in the role of the performing arts in the society - artists who has an awareness and intention to inspire people to connect and empathize can bring deep harmony in the society. This project gave birth to many of her following projects. Her leadership as a director of Cosmopolis Collective -Immigrant Story Telling Band was featured in New York Times immigrant panel and many other media. She was also invited to perform as part of Flushing Town Hall's Common Ground series Mini Global Mashup #6 "Korea Meet Armenia" where she premiered her music written for multi cultural collaboration between herself, Ara Dinkjian, and Satoshi Takeishi.