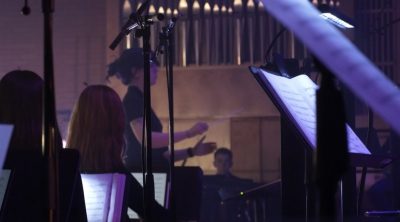 Siân Lyra Campbell is Musical Director, Composer and Pianist based in the West of Scotland. Hailing from Greenock she is a Graduate of the Royal Conservatoire of Scotland with a Professional Graduate Diploma in Musical Direction and a Bachelor of Music in Compositions. She is delighted to be continuing her studies with an MA in Musical Directing in the coming academic year.

Her most recent professional credits include working with Kick the Door production and OneRen on the actor-muso production of their new Scottish musical 'Thread'.

In 2021 Siân worked in collaboration with the RCS MA Musical Theatre Performance cohort to devise and workshop a new musical 'Beyond Midnight' for which she composed the music and lyrics.

She has worked with Kayos Youth Theatre (IYT) on their recent production of 'Godspell' and previously 'The 25th Annual Putnam County Spelling Bee' which was performed at the Edinburgh Fringe Festival in 2019. This year at the Festival she will be working on 'Shrek the Musical' and 'The Addams Family Musical' on Keys 1 & 2 respectively, under the musical direction of John Hodgson with Captivate at the Rose Theatre.

An avid panto lover, Siân has also had the pleasure of working with the Largs Players on their pantomimes since 2018, including 'Peter Pan', 'Cinderella' and 'The Snow Queen', for which she composed an original song.