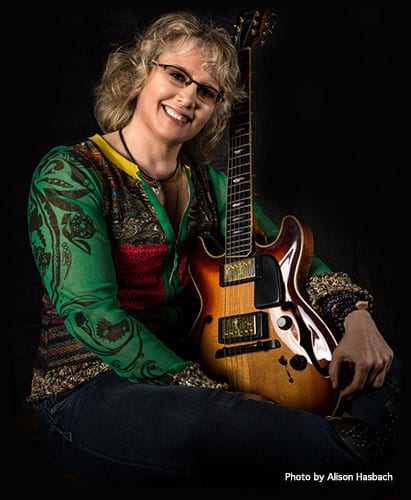 As a leader, she has toured the US, Canada, Europe, Australia, Hong Kong, China, Japan, and the UK with her many projects: The Sheryl Bailey 3, The Sheryl Bailey 4, The Electric Ladyland Project, and Plucky Strum.
She has 10 critically acclaimed releases as a leader. Her latest is “Plucky Strum” with bass master Harvie S via Whaling City Sound.

As an educator, she has been Professor of Guitar at Berklee College of Music since 2000, is faculty at The Collective School of Music in NYC, and has hosted master classes and workshops worldwide. Her Mel Bay publication, “Moveable Shapes,” is a top seller in their Jazz Curriculum Series. Her latest adventure is “The Bebop Dojo,” an interactive, online jazz academy developed for the Guitar Sherpa program at Truefire.com. Her “Bebop Dojo Essentials” course, her “50 Bebop Licks Everyone Should Know,” and recent “Bebop Etudes” are also top Truefire titles