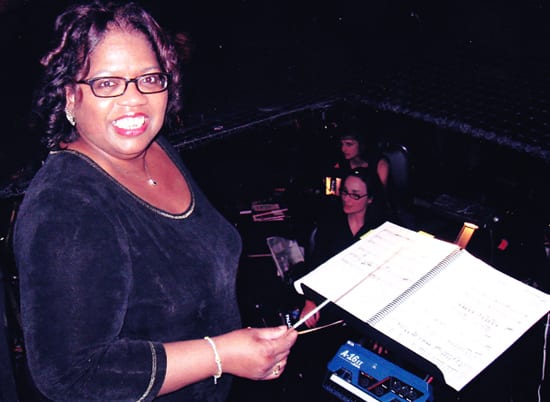 SHEILAH VAUGHN WALKER (Conductor/ Music Director/Voice Coach/Pianist). Her most recent credits include “The Gershwin’s Porgy and Bess”, starring Audra McDonald, Norm Lewis, and David Alan Grier, later opening on Broadway, where it was awarded the 2012 Tony for Best Revival of a Musical and an award for Best Leading Actress in a Musical to Audra MacDonald. Other outstanding Broadway shows include RAGTIME, with Brian Stokes Mitchell and LaChanze, and the first National Tour of “The Color Purple” which included such stars as Fantasia, Michelle Williams from Destiny’s Child, and Tony nominee Felicia Fields. She also worked as musical supervisor for a concert version of “Ragtime” in London, England, directed by Stafford Arima, and starring the Olivier award-winning Maria Friedman. She conducted two Broadway touring companies of ”Fiddler on the Roof”, starring Theodore Bikel. Some of her other touring credits include the musicals “Hello Dolly”, “Pal Joey”, “Grand Hotel”, “Singing in the Rain”, “The Mystery of Edwin Drood”, “Funny Girl” and “South Pacific” with such celebrities as Carol Channing, Jean Stapleton, Sir George Rose, Robert Goulet, Deborah Gibson, Joel Grey, Christine Ebersole, LaChanze, Brian Stokes Mitchell, and television stars Gregory Harrison, Alan Sues and Gavin McCleod.

Ms. Walker has conducted several regional theater productions over the years. She was winner of the 2005 and 2006 Leon Rabin Award for outstanding music direction for “Ragtime” at Lyric Stage and “Urinetown” at Water Tower Theatre. She is also a ten–year teaching veteran, and former chairman of the vocal department at the Dallas Arts Magnet High School where she was voted Teacher of the Year for outstanding work at that school. In addition to conducting, Ms. Walker was a voice accompanist/coach in New York City, as well as playing in some of the Broadway orchestra pits early in her career. Her television credits include appearances on Regis & Kathie Lee, The Tonight Show with Jay Leno, and The Jerry Lewis Telethon.

One of the most rewarding events in her life was conducting a 38-piece orchestra at LINCOLN CENTER, in New York City, in a concert version of the Broadway musical RAGTIME, starring Patina Miller, Norm Lewis, Lea Solonga, and Tyne Daly.