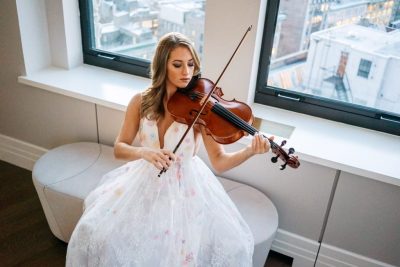 After graduating from the Eastman School of Music, Violist/Violinist Sarah Greene moved to Los Angeles to pursue graduate studies at the University of Southern California Thornton School of Music. While living in LA, Sarah was a recording artist for and appeared in numerous television shows such as Glee!, Fargo, and The Fosters. She also performed with artists such as Idina Menzel, Halsey, and Marco Antonio Solis. Sarah has performed twice in Carnegie Hall as a soloist and has played with many orchestras across the country. From 2016-2019, Ms. Greene was a member of a piano quintet for Lincoln Center Stage performing aboard Holland America Line cruise ships.

As a child and teenager, Sarah was a very passionate singer, actress, and dancer, performing in dozens of musicals in the Chicago area and at school. After she decided to pursue string playing as a career, she continued to be involved in musical theatre but this time in the pit, playing for various regional shows around Rochester, NY and Los Angeles. She has a great passion for musical theatre and hopes to play in a Broadway pit!