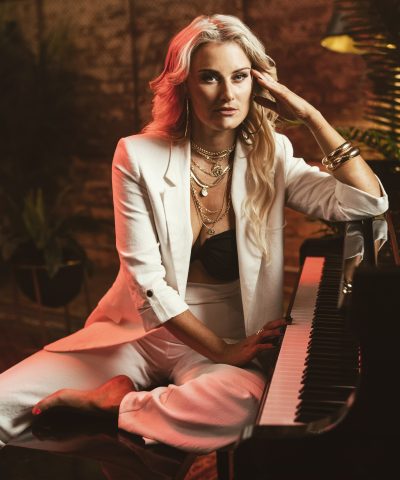 "While there are many fine performers and composers out there, Katie effortlessly combines both skills. Throw in her extensive experience as a Musical Director and she is triply valuable"
Tom Gleisner

“KATIE ILLUMINATES THE ROOM WITH HER PERFORMANCE ENERGY AND POWERFUL VOCAL PALETTE...”
The Baker Boys Band

"Falling Forward provides an incredibly familiar landscape through it's music. With universal themes relatable to a wide demographic of people, this is an exciting new work."
David Wisken

"Falling Forward is so well written - both from a lyrical perspective and an arrangement perspective. Clever motifs scattered throughout make it super easy to understand and follow each character's journey."
Samm Hagen

“A POWERHOUSE VOICE. KATIE WESTON IS THE FULL PACKAGE.”
Take The Mic Australia

Weston is a two-time award winning Lead Actress for the Music Theatre Guild of Victoria, having most recently starred as Lindsay in the world premiere of new Australian musical film “Suddenly: A Short New Musical”, part of the official selection for the Montreal Film Festival. Katie other recent acting work has been with Melbourne Theatre Company (MTC) and starred as Cathy in "The Last 5 Years" (2017). She is Green Room Award nominated Musical Director for her work on the hugely successful "Legally Blonde" (2019) and "RENT" (2018) at Melbourne's Chapel Off Chapel (James Terry Collective). Weston fronted her powerhouse band with the mesmerising self-produced "Uninvited: The Songs of Alanis Morissette" after her sell-out performance at Chapel Off Chapel in 2019 and the Australian Tour in 2021.

Weston is also an acclaimed musical-theatre composer, having released original musicals: "Sugartown" (2015) and songs from the widely successful "Falling Forward" (2019). Songs from "Falling Forward" have been featured on tertiary music theatre course audition lists and course curriculum for NIDA, WAAPA, VCA and Fed Uni. She is currently composer of an exciting new Australian musical collaboration to be announced in 2022.

Weston is a sought after live vocalist and keyboard player, fronting international corporate bands The Baker Boys, The White Tree and her own Katie Weston Band. This Summer, Katie will be releasing her new EDM single “Conversation Ended” with co-producer Neyana. Her previous releases include original pop-rock EP “Say The Word” in 2011 with single “I’ve Been Waiting” and her debut single “This Is What I Really Want” (2007). .

Katie is the Head of Music at Leibler Yavneh College, Melbourne during daylight hours.