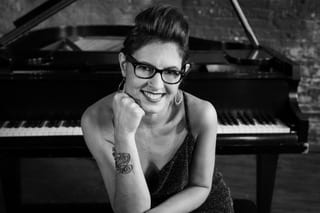 Kara Kesselring is a professional pianist/vocalist/songwriter/MD/educator based in Chicago.

One of Kara's most notable accomplishments was touring as a pit musician & MainStage tech for the smash Broadway hit Jersey Boys. She was in the Broadway Tour 2 company and played for many years in over 65 U.S. cities as well as Canada and Japan.

She toured and arranged music for the hot PBS doo wop group, "Under The Streetlamp". The group has produced many PBS specials.

Kara has also subbed on keys for such shows as Waitress, A Bronx Tale, The Grinch Christmas tour. In addition to Broadway shows, she has played and/or Music Directed shows at Chicago Broadway Playhouse, Chicago Shakespeare Repertoire, Marriott Lincolnshire.

Kara wears many music hats and performs a variety of music genres. Kara is a singer/songwriter and performs with her Country/Folk/Americana group Sugarcreek Road, writing songs about growing up on an Iowa farm. Her original album, "Hurry Up & Relax" can be found on iTunes.

Kara cut her teeth in the sketch comedy troupe Wavelength playing piano, singing and writing for improv corporate shows for educators. She performed in all 50 states as well as Singapore and Guam over 20 years.

Originally from Iowa, Kara received her undergraduate degree from U. of Iowa where she met her bass playing husband, Patrick Williams. The music duo have a daughter named Iris and a dog named Daisy. They currently live in Brookfield with their four chickens.