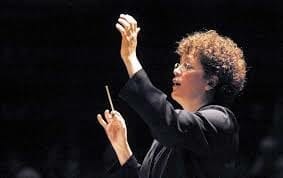 Judith Clurman is an Emmy and Grammy-nominated conductor, and educator. She is the musical director for Essential Voices USA (EVUSA), The Symphony Singers, and the Singing Tree Float in the Macy’s Thanksgiving Day Parade. She currently edits choral music for Hal Leonard. Her chorus serves as the resident ensemble for the New York Pops for their Carnegie Hall’s subscription series. She has worked with many of the world’s finest symphonies (New York Philharmonic, Boston Symphony Orchestra, Orchestra of St Luke’s), has commissioned new works by over sixty American composers, and served as Associate Music Director for season 39 of Sesame Street. As an educator, she served as Director of Choral Activities at The Juilliard School from 1989-2007, has been a visiting artist/teacher at University of Cambridge, Harvard University, Curtis Institute of Music, Princeton University, and the Janacek Academy and was faculty at the National Endowment for the Arts/Columbia University Institute of Classical Music. She is currently a member of the Musical Theater faculty (private voice and ensemble singing) at the Manhattan School of Music. She is a member of ASCAP, ASCAP’s Special Classification Committee, and the National Academy of Television Arts and Sciences. Her music and arrangements are published by G. Schirmer, Hal Leonard, and Schott and have been performed by the New York Pops, the Boston Pops, and Detroit, Houston, National, and Toronto Symphonies.