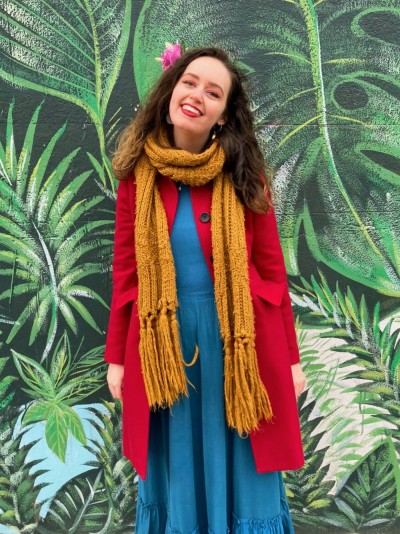 Hel MacCormack is a 25-year-old composer, lyricist, performer, comedian, and multi-instrumentalist from Liverpool and currently based in London. A finalist in the UK Musical Comedy Awards 2021, Hel’s delightfully dark ditties around mental illness, femininity, sexuality, and the debris of life will get you going ‘haha! Wonderful! Oh actually that’s a bit fucking grim.’

MUSICAL COMEDY (2018-present) - Whilst studying a BA (Hons) in Drama, Theatre and Performance, Hel took to writing and performing musical comedy, landing a place in the 2021 finals of the UK’s Musical Comedy Awards and performing at the 2019 Edinburgh Fringe, receiving a standing ovation from the crowd at the iconic Underbelly variety show SPANK! for her punchline-laden cabaret entertainment.

THE WOMANGIRL'S FLOOD (2021) - This year, Hel debuted an innovative project which combined poetry, storytelling, comedy, and music. Telling the story of 'a womangirl who cries so much, she floods the town', Hel tenderly paints her experience of mental illness, grief, womanhood, and growing up.

ROMANTICALLY STUNTED (2017) - Written during her time studying Professional Musicianship with a specialisation in Vocals, Hel’s debut EP ‘Romantically Stunted’ is a small collection of original folk-pop songs 'about real and fictional love', combining catchy melodies with witty and thought-provoking lyrics.

JINGLES (2017) - Hel has composed and recorded jingles for the podcasts ‘Make Out With Him’ by Lex Croucher and Rosianna Halse Rojas, and Leena Norms’ ‘I’m Not Being Funny But…’., working to a brief and giving several variations until the clients were happy.

Taking influences from the candid lyrics of pop/rock singer-songwriters such as Kate Nash and Mitski, the comic timing and daring material of musical comedians such as Tim Minchin and Bo Burnham, and the recognisably punchy musical theatre style of delivery, Hel’s writing is described as raw, funny, and powerful.

Hel also spends her free time working on solo creative projects, having composed standalone musical theatre numbers, created a spoken word poetry project, and put together a podcast about bisexuality as a participant of Stonewall’s Young Campaigners Programme. She continues to write folk-pop songs and musical comedy and is open to contributing as a composer/lyricist for a new original musical.