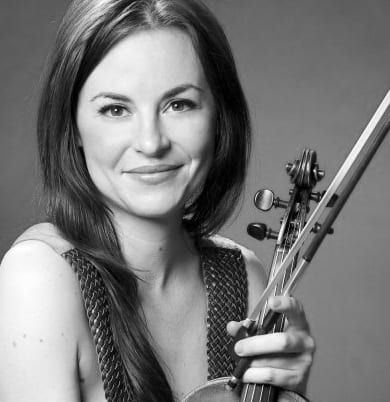 Violinist Erin Benim Mayland has been fortunate to have a career that spans classical stages, Broadway pits, rock stadiums, and recording studios in some of the most revered venues in New York City. Erin has been an original band member of Hamilton on Broadway since the show's inception at The Public in 2015. She can be heard on the multi-platinum Grammy award winning Hamilton cast album, as well as in the role of Concertmaster in the Hamilton movie. As a violist, Erin recorded the Grammy winning American Idiot cast album. Erin was the onstage cameo violin soloist for the Broadway production of Chaplin, and in addition, she has held violin and viola chairs with the shows The Bridges of Madison County and Something Rotten. Erin has also been a member of the Radio City Christmas Spectacular Orchestra.

Notable performances include performing at the White House for the Obamas, and sharing the stage with artists as diverse as The Roots, Adele Live at Radio City, Antony and the Johnsons, Elvis Costello, Erykah Badu, Deep Purple, Lorde, Kelli O’Hara, Janelle Monae, Lana del Rey, and Busta Rhymes, among many others. Television appearances include Late Night with David Letterman and Stephen Colbert, Jimmy Kimmel, American Idol, Mozart in the Jungle, NBC’s “Sound of Music Live!” and “Peter Pan Live!” as well as live performances at the 2010 Grammys with Green Day and the 2016 Grammys with Hamilton.

While living in the Bay Area, Erin was the Assistant Concertmaster of the Santa Rosa Symphony and performed with the New Century Chamber Orchestra, the San Francisco Ballet, and Skywalker Orchestra, with whom she recorded numerous movie and video game soundtracks. Erin has degrees in violin performance from the San Francisco Conservatory and the University of North Carolina School of the Arts.