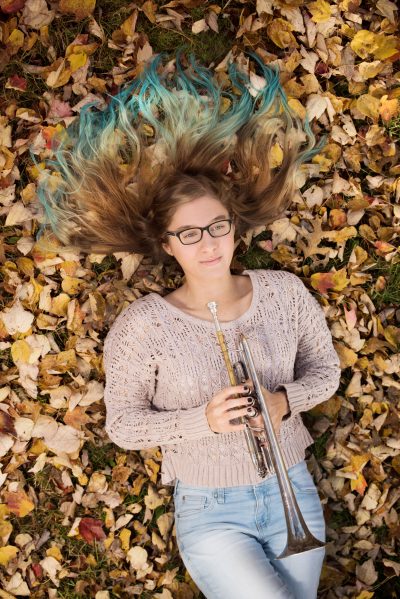 Not many children beg their parents for more lessons, but by the age of five, Carolyn had convinced her mother to begin teaching her piano. Now a trumpeter and recent graduate of Manhattan School of Music, Carolyn prides herself on her wide range of musical experiences. In addition to a background in piano and guitar, through which she’s developed a keen ear and knowledge of music theory, she has assumed many roles in her trumpet career.

On the classical side, Carolyn spent two years in the New Jersey Youth Symphony, founded and led her own brass quintet, and toured Europe as a soloist in Vivaldi’s Concerto for Two Trumpets. During college, she’s performed chamber music ranging from Renaissance counterpoint to Ewazen and Ficher, and orchestral repertoire from Haydn symphonies to the premiers of new works in 2019 and 2020. She’s also performed in the pit orchestras for eight different musicals outside of MSM, including the New York premiere of Gatsby: A New Musical at the Hudson Guild Theater. Thanks to these experiences, Carolyn is comfortable playing in many styles, from jazz to classical and everything in between. She also specializes in audition techniques and took part in 14 different honors ensembles throughout high school (7 as first chair), from NAfME’s All Eastern Honors Band to NJAJE’s All State Jazz Ensemble.

Over the years, Carolyn has drawn expertise from numerous teachers, including New York Philharmonic members Tom Smith and Ethan Bensdorf and Metropolitan Opera principal trumpet David Krauss. She is also a disciple of Arnold Jacobs’ philosophy — as he describes in his Song and Wind — and shapes her sound to serve each piece of music's particular tone, character and story.