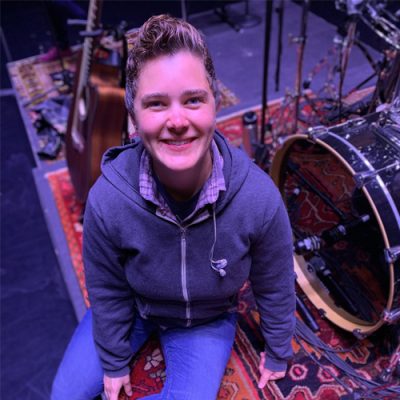 An avid theater musician, percussionist/drummer Ashley Baier has performed on Broadway with Six and The Lightning Thief, appeared at La Jolla Playhouse and on tour with Hundred Days, and toured nationally with How the Grinch Stole Christmas. A proponent of new musical theater, she originated the drum books for several musicals including Interstate, American Morning, and Pryor Rendering.

Baier has performed with a variety of orchestras, chamber groups, and artists including PitchBlak Brass Band, Pharoahe Monch, John Hodgman, The Bengsons, Brass Queens, the Broadway Sinfonietta, Melissa Li & the Barely Theirs, and Kermit the Frog. She has appeared at renowned venues including Carnegie Hall, the Kennedy Center, Lincoln Center, Blue Note, Brooklyn Bowl, (Le) Poisson Rouge, and Joe's Pub.

Originally from Cumberland, MD, Baier has a BM from the University of Maryland and a MM from Mannes College, the New School for Music. In 2017, Allegany High School—her alma mater—dedicated an award in her name: the Ashley Baier Award In Percussion Excellence is given to a graduating senior who demonstrates outstanding leadership and dedication to the highest level of musical performance.