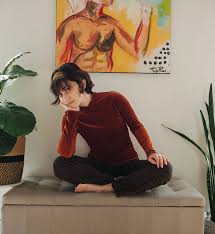 Angela Sclafani is a New York City-based performer and songwriter. She’s a resident of the Orchard Project Greenhouse, a two-time alumna of Ars Nova’s ANTFest, and a 2018 Jonathan Larson Grant Finalist. Angela is also a recipient of the Richie Jackson Artist Fellowship and the Anna Sosenko Assist Trust Grant. This past summer, she participated as a composer in the 24 Hour Plays: Nationals Festival and Songathon in NYC. Her debut musical, The Other Side of Paradise, which she wrote, co-produced, and performed in, premiered in 2017 at Ars Nova's ANTFest. Angela has performed the work of creators like Todd Almond, Heidi Rodewald, Shaina Taub, and Tonya Pinkins. Her recorded music releases, Your Ghost and Blossom, are available to stream and download online. Angela graduated from NYU Tisch with a BFA in Drama and studied at Playwrights Horizons Theater School, the Experimental Theater wing, and Stonestreet Studios. www.angelasclafani.com