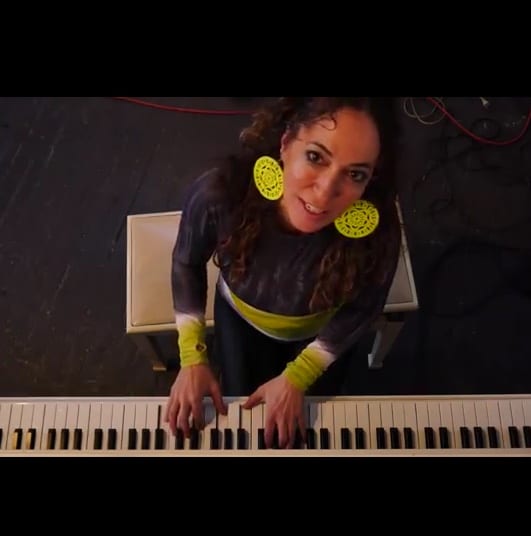 “Her voice, at once seductively childlike and worldly-wise, Alexa Babakhanian's music delivers with a haunting sense of melody that is uniquely hers." Tim Page, The Washington Post.

Featured in Film, TV and Radio, Babakhanian has graced Carnegie Hall, Lincoln Center, and countless halls globally and has performed and collaborated with members of The New York Philharmonic and Yoyo Ma’s Silk Road Ensemble.
An American mix (her father is Armenian from Iran, and her mother is Austro-Hungarian) she has a range of expression, including Improvisational free form, Tonal, Atonal, Classical, Modern, Extended Techniques, Pop and other genres.

Babakhanian came to The Juilliard School on scholarship and received multiple degrees. She was soon offered a nine record contract with RCA. An active performer, composer and educator, she has a prolific and broad output. She's had works commissioned, performed and premiered by Rebecca Young, Associate Principal Viola of The New York Philharmonic, Japanese Gagaku Masters and numerous others both in the US and abroad.

Babakhanian has written hundreds of songs and lyrics in many languages including Spanish, Japanese, French, Armenian, Italian, Portuguese, Arabic and English. She has always set her words to music and is fascinated with production and theater. She also writes for conventional scorings and instrumentation from solo to chamber to orchestral. Babakhanian is open and drawn to interesting sounds and instruments...some ancient, like the Gagaku Instruments of the Imperial court of Japan such as Sho, Hichiriki, Ryuteki. She describes them as "other worldly and timeless." She blends new with old, for example pairing Toy Piano and Sho in her work "Flighty Butterflies" and Viola with Three Gagaku Instruments in her quartet "Four's a Crowd."

She celebrates Old and Young in her Multi- Media work "There was a Child Went Forth" based on Walt Whitman's poem from "Leaves Of Grass" for performers 1-18 and 65-1OO. About the work, Babakhanian reflects "I like to lend voice to and represent the unrepresented."
Her work "Dear Mr. Sondheim" about her own life is is a multi-genre musical/opera. Rebecca Young, Principal Violist of The New York Philharmonic has premiered several of her works, a relationship Babakhanian treasures:
“I am lucky to have such a muse and talent to speak through.” Babakhanian has experimented with spoken word/singing while playing and moving, and the blending of genres. Her collage poem inspired by * Beat women Poets was the inspiration for her Commissioned work - a Mini Opera for New Music New York.

She recently finished her Opera"Lady Liberty And The Women Of Don Quixote“ the orchestral score and libretto (in English) solely created by her. She presented excerpts of her work in celebration of International Women's Day in Madrid, performing for the US Ambassador to Spain and members of Teatro Real and will also present that and excerpts of her new opera based upon Shakespeare and Amelia Bassano this season at the International Institute.

“I am fascinated by Amelia Bassano, a Venetian “Mullato” (hidden) Jew and a member of the Bassano Family, the musicians of Queen Elizabeth’s court. She was the first woman poet to be published in England and her writing highly regarded and has compared to Shakespeare. Orphaned at age seven, Bassano was taken in by Lord Willoughby’s sister, Lady Bertie and at 13 became Mistress of Lord Hunsdon, Queen Elizabeth’s half brother and the illegitimate son of Henry the 8th. Lord Hunsdon was patron of Lord Chamberlain’s men, the acting troup of the royal court of which Shakespeare was a member. She is widely considered to be Shakespeare’s Dark Lady portrayed in his famous Sonnet. Some think she may have written some of Shakespeare’s work. The Globe Theatre recently commissioned a play “Emilia!” played entirely by women in which her character accuses Shakespeare of stealing her ideas. She was a fascinating figure in her own right. I look forward to immortalizing her life and work in my Opera!” Babakhanian will meet with The Globe Theatre this March to discuss a collaboration.

Excerpts of Babakhanian’s Opera and Song Cycle "Las Damas De Don Quijote" inspired by the women from Cervantes' masterpiece was recently performed in Madrid by Mezzo-Sopranos Anna Tonna and Pianist Isabel Perez Dobarro as part of a cross cultural forum on Women in Music. The Cycle was performed at Lincoln Center's Bruno Walter Auditorium and was sponsored in part by The New York Philharmonic on January 24th, 2O18 and received an enthusiastic audience response and critical acclaim.

Her Multi-Media work with Japanese text, based on Hyakunin Isshu and the art of Hokusai was premiered at Columbia University. It is scored for Gagaku Instruments, Piano, Percussion, Electric Guitar and Voice and is a theatrical work with dance and videography. Her performance of her original song “In The Garden” most requested song on WNYC/WQXR is also featured in her Opera. Babakhanian is a regularly featured guest and performer on WKCR including the annual Bach Fest.
As a singer, her performance of "Scarlet Rose" featured on CBS has over a million hits on YouTube. She was recently featured on Lynn Crystal's program "Carnival Of Song" on WFDU. She was recently selected and featured live on WNET's New York Stories.

She was one of seven Americans selected and invited to compete in the Chopin International Piano Competition in Warsaw, Poland and has been awarded numerous prizes and scholarships. Her solo performance of Debussy's "Des Pas Sur La Neige" is featured as well as her collaborations with players of the New York Philharmonic throughout the Commercial Film "Other Voices Other Rooms" based on the novel by Truman Capote.

Babakhanian will be artist in residence at Lincoln Center this Spring and will present excerpts of her Operas.