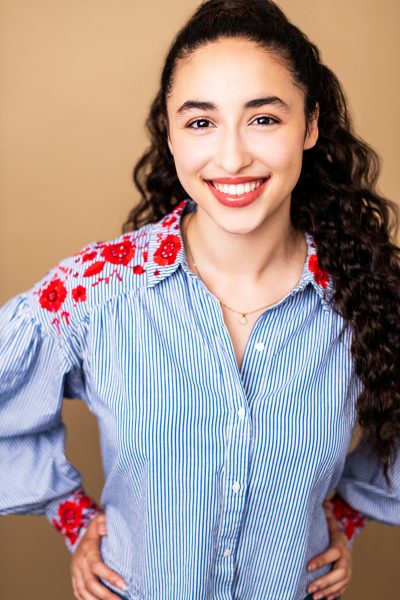 I’m currently a sophomore at Tisch’s Clive Davis Institute and the Music Director for the NYU a cappella group N’Harmz. I’m originally from Los Angeles and have performed at venues across Southern California including; Whisky a Go Go, LA Marathon, Topanga Days and Make Music Pasadena. As part of LACHSA’s Vocal Jazz Ensemble, I performed at the Monterey and Playboy Jazz Festivals. For two years, I was a soprano in the a cappella group Legacy, under the direction of Rob Dietz.

I have been working professionally as an actor since I was 9. In 2015, A BMW commercial I was featured in as both an actor and a singer was a Eurobest winner for original music. In addition to commercials, I served as a co-host host for 200+ episodes of DreamworkTV’s hit web series, Junk Drawer Magic. The web series was spun off into a TV show for PeacockKids, Junk Drawer Magical Adventures, that I sang the theme song for and starred in.

In 2021 I received Honorable Mentions from YoungArts in Jazz and Popular Voice as well as a Merit win in Singer/Songwriter. I also received the 2021 Music Center Spotlight Honorable Mention in Non-Classical Voice; 2020 YoungArts Honorable Mention in Popular Voice, and Merit Winner in Jazz and Singer/Songwriter.  At the 2020 NAACP National ACT-SO’s I won Bronze Medals for Music Composition and Film and, in 2019, a Gold Medal for Music Composition. In 2019, I was also a winner of the NEA & American Theatre Wing’s Musical Theatre Songwriting Challenge. The music video I produced for my song Torn won Audience Favorite at LACHSA’s 2019 Music Video Festival.

In 2020, I was chosen to serve on the inaugural Editorial Board of Youth Educated for Change (YE4C), a government funded youth engagement initiative designed to help young people engage in change on personal, community, and national levels.